Why Wait Until Midnight? 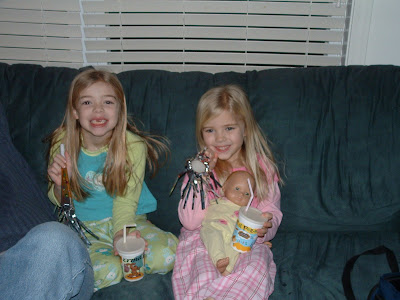 When the girls and I were grocery shopping New Year's Eve, we ended up having a discussion I never thought I'd have with them at this age (almost 6 and almost 8). I was looking for some sparkling grape juice or cider so we could have a toast at midnight. They were of course full of questions. "Why do you have a toast at midnight?" "Why does the New Year start at midnight?", Etc.
The older one, Kiki, also noticed that lots of people were buying wine and eventually asked me "Why can't kids drink wine?" Oh boy, was that ever a loaded question! I was trying to think of a way to explain it that she would actually accept. I knew just telling her it was for grown ups would not satisfy her. She always wants to know exactly why something is the way it is. You can't ever tell her "Just because." If she overhears an adult conversation and wants to know what is going on, she is NOT happy when we tell her to basically mind her own business. So needless to say, she wanted to know exactly why kids couldn't drink wine. So I told her the truth: "Wine contains alcohol, which is a drug that makes your head feel funny." OOPS. Now she wanted to know why it made your head feel funny. I told her I just didn't know why, but it did. I also told her that some medicines contain alcohol and that they generally make you just feel a little silly or maybe just make you tired.
So then she said, "Oh so grown ups drink wine because they like to feel silly?" I thinking "of course!" but instead said, "Yeah, I guess because it makes them feel happy when they drink it. And some grown ups just like the way it tastes." I realized now that I was digging myself deeper into a hole that I might not make it out of. So then I said, "But there is something really bad about alcohol. If someone drinks too much it can make them really sick. And if you drive after drinking too much, you can get in a car crash." I also told her that it doesn't make everyone feel happy, but that some people just get tired or even grumpy.

I looked at Kiki and saw the wheels beginning to turn. Then she said "Do people do that? Do people really drink too much and then drive a car?" I told her "Yes, sometimes grown ups drink too much and then drive" and she said "Oh so that's what they mean by drinking and driving!" Obviously she's seen a public service announcement or two or maybe learned about that during DARE (the police sponsored anti drug program) week at school. I was waiting for more questions, trying to think of what to say next. But nothing else was asked or said. She was satisfied - for now at least.

I worried that maybe I opened a can of worms that I shouldn't have, but now that it is open, I hope she has learned something from our talk. I hope that she remembers this as she gets older and kids start talking about alcohol at school. If the only thing that sticks in her head is "drinking and driving is BAD and you can get in a car crash, " I will be pleased.

So fast forward to much later on New Year's Eve. We had decided to let the girls stay up with us until Midnight. They had never done this before and we thought they would enjoy it. I had them take a nap just so they would make it. Around 10:30 the girls wanted to know if we could drink the sparkling lemonade we had bought that day. Bill told them "let's wait until midnight, " and then I added "yeah so we can toast the New Year." Kiki then asked "Why wait until midnight?" and before I could answer she said "To make you tired?" Bill and I looked at each other and just laughed! Well that is certainly one way of looking at it! 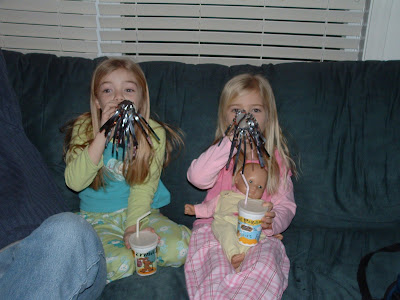 The girls with their "hooters and tooters" (as they like to call them)!
Posted by Kristi at 10:42 AM

What a fun celebration for the New Year!

And I love that your daughter won't take the "brush off" answers. Teagan is also like that and it really keeps me on my toes!