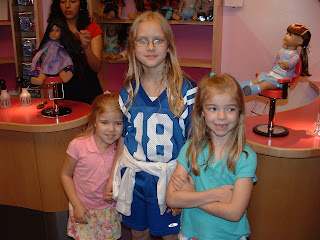 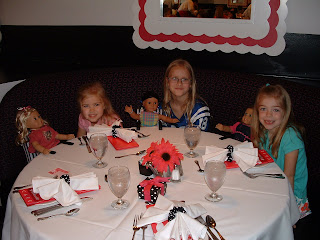 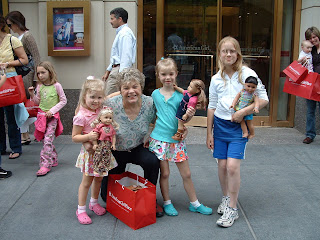 A Case of Blog Envy 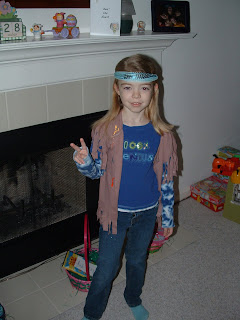 OK, so I was fairly proud that I finally managed to blog and showed it to everyone, including the girls. Needless to say Boo beamed, and while Kiki enjoyed Boo's story very much she did have some blog envy. "Is there a story about me?" I told her I wrote that one first because Boo had just graduated and I was very emotional about it. She wanted to know if I had a "motional" story about her too and I told her I had several, and just had to pick one to write about. Then she says "Well how about when I lost my teeth! You cried when that happened? Remember?" Well of course I remember! How could I forget? I just didn't realize she noticed the tears. I tried hard to hide them, but it was impossible.

Yes, she lost her teeth and of course all kids do eventually so why did I cry? Well, lots of reasons really, the biggest is that she wasn't supposed to lose them yet! Her top middle baby teeth were not even loose! She did have a loose one on the bottom, plus one that she had already lost. I couldn't have been happier about her losing those too because she was excited, enjoyed wiggling them and she finally felt like she was like all of her first grade friends, who had all already lost at least one tooth.

This was different though. One day she had her teeth, two days later they were just gone. Poof! No preparation or anything, no wiggling, excitement, etc. My older baby's look had completely changed in just a matter of days and I wasn't at all ready to deal with that. I still feel that way sometimes when I look at her, even though I am used it now.

Kiki lost her teeth because she tripped on a bag in the kitchen. A bag I left out while packing for vacation. A bag I should have and would have put away, but I kept walking past it and left it where it was, even though I knew it was dangerous. I even warned the girls not to run in the kitchen, something I probably say a hundred times a week, because of all the stuff we had out. Laundry baskets, suitcases, duffle bags - you name it. They were scattered everywhere and I had little by little put things away for safety's sake. Except for this bag, with a handle sticking out. I hadn't yet got around to that and what do you know, she trips on it, hits her mouth on the counter and her whole appearance changes in a matter of seconds. She didn't really cry when she fell, so I didn't react quickly and figured she was fine. Something didn't look quite right with her mouth, but then her hand partially covered it, so just gave the usual "oh sweetie, I'm sorry you fell" and started to move towards her to comfort her. Bill had a better view of her and instructed me to get a couple of towels "NOW!" As I made my way over to the sink I turned and noticed the blood. I practically froze because who is ever prepared to see THAT MUCH BLOOD gushing from their child's mouth? Certainly not me! 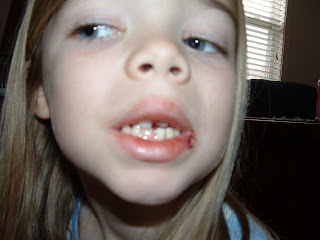 I got the towels, rushed over to Kiki and then saw the tooth. Her top middle baby tooth. It was shorter. Much shorter. Where did it go? Up into her gums! I also saw her lip was cut and that was where most of the blood was coming from. I was panicking on the inside but trying my best to stay calm on the outside, for Kiki's sake. But I think she saw the look on my face because she said "mommy what is wrong?" I just told her it would be ok. I truly believed that when I said it too, even though I knew that tooth would be pulled and she would likely need stitches. That is exactly what happened too - she got 2 stitches and lost 2 teeth, all in a matter of days. 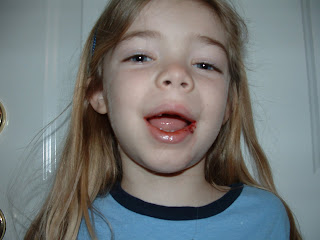 I will never forget how I felt when the dentist said they would need to pull both teeth, because one was bumping the permanent tooth and there was also risk of infection. My heart sank. I kept thinking if it weren't for me, and that stupid duffle bag, we wouldn't even be there! She would still have those teeth. We would still get to have the thrill of wiggling them and watching them come out, one at a time. My child is paying for my poor judgement, carelessness, whatever it may be. I smiled at her and told her "now you will be just like your friends" and she grinned. She was happy, even though she was scared too about having them pulled. 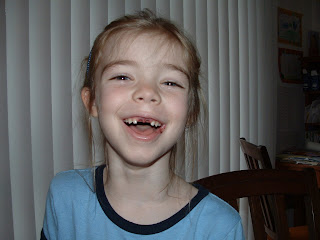 Kiki showed me one thing during this whole thing. She is braver than I thought she was, maybe even braver than me. She took the whole thing in stride and told me "it will be ok Mommy". I did get tears in my eyes a few times the day she had her accident, and again when she had her teeth pulled but I never realized she knew. I tried hard to hide them and put a smile on my face for her the whole time. Just goes to show you how perceptive our little ones really are.

Kiki, I've told your story now for all to see what a brave girl you are. Not such a little girl anymore. You too, like Boo, are growing up too fast right before my eyes. I am so proud of you! 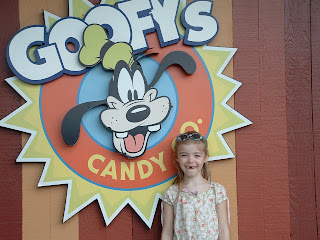 My baby graduated from preschool! 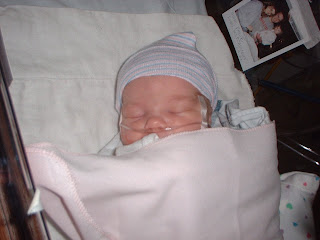 This is my very first time ever blogging! I have wanted to do this for years but never seem to know how to get started. So here it goes. . . a work in progress!

Where or Where does the time go? It seems like just yesterday my littlest baby girl was born and now she has graduated from preschool! She will start Kindergarten in the fall and that is just so hard for me to wrap my head around. Boo had a difficult start to life. She had complications at birth - her cord was pinched which cut off her oxygen supply. No heartbeat and not breathing when she was born. She was revived and spent 10 days in the NICU, a time that seemed like it would never end. We worried so much that she wouldn't make it and wondered what her life would bring. They told us to expect the worst but I was determined she would be just fine. I call her my miracle baby and that is what she is. Every birthday she has is extra special to me because I remember how hard she fought to live past that first day.

I couldn't help but think of that today as I watched her march up the aisle, sing songs and get her diploma. She is still a fighter and as stubborn as can be. My baby. I know the time is precious and one day she will be graduating from high school. I treasure every day I have with her and try my best to make sure she knows it.

So, Boo. This day is for you!
Love you sweetie!