A Wish and a Prayer

I am a big believer in community and that we should help and support each other as often as possible.  I see and hear about so much selfishness in our country these days it makes me sad. There are so many people (politicians come to mind)  doing all they can to help themselves and not enough people doing more to help each other.

Thankfully, I am fortunate enough to live in a community full of giving people.  I witness almost on a daily basis, so many random (and not so random) acts of kindness that I am proud to call this community my home.

Several years ago our community rallied to help a local teenager needing expensive cancer treatment.  Just a few days after the news broke about his illness and the insurance company's refusal to cover the treatment, people in our town raised more than enough money to cover the treatment and related expenses.  Such kindness is what makes it hard to imagine ever living anywhere else.

I've also seen the Internet community rally and help people in need. When there have been international disasters, such as the Japanese Tsunami or the earthquakes in Chile, people have spread the word, sent donations via text, etc. I've also seen the Internet band together here locally for tragedies such as the Indiana State Fair stage collapse and more recently, the Southern Indiana Tornadoes.  The kindness and outpouring of support is always so heartwarming and just shows me that no matter how far apart we are, we are all one big community.

Now it is my turn to reach out to my local and Internet friends for help, not for me, but for my friend Mike and his family.  Mike has been sick for years now, with a condition yet to be diagnosed.  Now his son, a freshman in high school, has been stricken with a similar illness and one of his daughters has been recently diagnosed with a brain tumor.  The medical bills are mounting and it is getting more and more difficult for the family to cover those everyday expenses.  Due to his illness, Mike hasn't been able to work much and even though his wife is working, it is just not enough anymore.

I can't possibly do their story justice on my blog so I am posting a link (below) to a website Mike's sister started for their family.  At this point, every donation will help no matter how big or small.

I am also a big believer in the power of prayer and positive thinking, so If you can't help out financially, please send your positive thoughts and prayers his way.  I'd also love for anyone who reads this to share this with your friends and family as well as sharing the story on Twitter or Facebook.


We may not all live in one city or town, but we are all a part of a community called the Internet and we have this wonderful tool called Technology.  So let's put our computers, smartphones, tablets and social media to work and do something good for a wonderful family who needs us now more than ever.

Click here to learn more about Mike's story and how you can help:

I have lived in the Indy area for about 13 1/2 years, moving here just a few months after Bill and I married, and the same year as Peyton Manning's rookie season with the Colts.  I remember that football season well, even though we didn't move here until November of '98, well into the football season.  Peyton's name was all over the news, so it was hard not to notice him.  Peyton had a great 1st season, despite the Colts' losing record of 3-13, setting all kinds of rookie records and winning the hearts of people all over the Indy area, including mine.

Peyton's humble, boyish charm (along with his amazing athletic skill) quickly won Indy fans like me over that first year. I was never a huge football fan, especially not when it came to the NFL, until Peyton Manning came along.  Watching him play was so much fun, that as soon as one game was over, I was already anticipating the next one. Even when he had a bad week, I could never be mad or frustrated with him.  After all, no one is perfect.

I've never known Indy without Peyton, so the thought of living here without him feels sorta like a best friend suddenly moving away - getting an empty feeling in the pit of your stomach, not knowing when you might see him again. Except that we will likely see him again, wearing another team's uniform, winning over a new set of fans. Next fall, no matter where he might end up, I am sure to have a bad case of fan envy, jealous that another city has him as their own.

My girls are sad too. Peyton was their favorite and the only Colts quarterback the girls have ever known.  They don't understand why he's leaving, and why would they? No matter how many times we explain that he is a professional, that playing football is what he is paid to do, that the NFL and the Colts are a business, they just don't get it.  They see football only as a sport, something to do for fun and to entertain fans, not for a way for someone to make money.  One of Kiki's favorite toys when she was little was "football bear, which was a Peyton Manning Beanie Baby that she carried around everywhere.  Ah, memories. *Sniff*

I am not normally one to put celebrities or sports figures high up on a pedestal.  I think in general professional athletes are overpaid and so many of them parade around like they are so much better than everyone else. Often you hear of a football players getting arrested, beating girlfriends or wives, or driving drunk and making a fools out of themselves. But not Peyton.

One of the reasons he is so popular with so many different people is because he is so humble and down to Earth.  After a big play, he might flash a quick smile after completing one of his spectacular touchdown passes, occasionally patting a few guys on the back on his way to the sidelines. But then he gets right back to work, talking with his coaches and fellow teammates, plotting out his next play. No dancing around or running to high five fans in the end zone.  No spiking the football or jumping all around chest bumping other players.  And he doesn't throw fits when he doesn't play well. Sure, you might see a grimace or shake of the head when a play went horribly wrong. But then he'd get right back to work, trying to see how he could fix his mistake.

Peyton meant so much more to Indy, to his fans, than just football. He was a fantastic role model for thousands of boys and girls. He gives much of his earnings to charity, including making a huge donation to a local children's hospital, which is now named after him. Not only did he donate his money, but he invested many hours off of the field and off season to help so many in need. Whether it was coaching or mentoring kids, participating in a fundraiser, hosting a football game for HS students or visiting sick kids in the hospital, Peyton was always dedicated to helping people in our community. Not only did the city and Colts fans embrace Peyton, he embraced us as well.  He always made sure we knew he was part of this city, that he wasn't just here to play a game.  I wish there were more like him in sports and in life.  He is a true gem.

So life goes on in Indy, for the Colts, without Peyton.  I am still a Colts fan and won't jump off any bandwagons just because he is gone. I know he was out all of this season with a neck injury, but it will still be awfully strange when football season starts next fall, to see the number 18 jersey hanging from the rafters and not on the back of a player I was used to seeing on the field every Sunday.

Thanks for a fantastic 14 years, Peyton. You may be gone from Indy now, but you will always have a place in our hearts.

I haven't written a post since October, which is probably one of the longest dry spells I've had since I've started my blog.  I really hate that I don't post more often now, but life has just zapped about every ounce of creative energy I have left.  Motherhood, work, taxiing the girls to and from activities, house work. . . rinse and repeat. . .

I have plenty of inspiration and reasons to write, but when I do manage to find the time, I find I can't even write a sentence.  I feel like a broken record, as I know I've said this same thing, on this very same blog, so many times before in the past two years.

I know probably should give up and quit this blog, but I just don't want to let it go.  I don't even know if I have any readers left, but my purpose for starting the blog in the first place was to have to have an outlet to share my experiences as a mother, not reach out to an audience.  Connecting with readers and meeting and tweeting with other bloggers has just been a wonderful perk.   I don't even know if "Momexperience" is an appropriate title anymore, since so much of what I want goes way beyond being a mother.  Yet I don't know what name really fits my blog (I am, however, open to appropriate suggestions).

Kiki scolded me the other day because I haven't written a post about her in a really long time.  She said she loved reading what I wrote about her, so now I am feeling quite guilty.  It is not that I haven't tried. A few months back, I had an entire post written all about her and how she's grown up so much, only to have it disappear into Internetland.  I tried to recreate it, but since so much of my writing is "in the moment, " it just wasn't happening.


Here's to hoping I can get started writing again. . I do have a few posts in the works right now, (including one about a recently departed, beloved sports figure here in Indy).  Maybe if I'm lucky, I will  have one of them up before the record skips again. 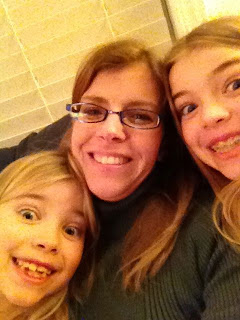