Just eight short years ago, on January 4, my little fighter was born.  Boo arrived eleven days late,  without breath or heartbeat, and fought for her life in the NICU.  Even though the doctors gave every worst case scenario (I know, they have to), she proved them wrong, won the fight, and is now a strong (and stubborn!), smart, spunky and healthy child.

I often feel Boo is our miracle baby, and because she had a rough start to her life, shouldn't have to ever fight that hard again in anything she does.  Life however, has already been full of challenges for her.  I know that many children go through so much worse, but as her mom,  I can't help but feel badly for her when she has these experiences.  I sometimes feel like she has gotten and continues to get the "short end of the stick."

Her most recent challenge happened this past December, just before Christmas. Boo was part of a local dance company's production of The Nutcracker.  Her older sister, Kiki, was in the same production in 2009 and just minutes after Boo watched her perform, she knew she wanted to try out the following year.  She almost immediately announced that she wanted to be a Gingersnap, the Nutcracker role this dance company often gives to dancers Boo's age.  She talked about being in The Nutcracker off and on from December 2009 until auditions this past August.  Boo auditioned, was chosen to be in one of two Gingersnap casts and was simply over the moon with excitement.  Nothing (except maybe a pet pig) could have made her happier.   Boo cheerfully looked forward to and attended every rehearsal, and like a child anticipating a birthday or Christmas morning, frequently asked how many more weeks/days/hours/minutes/seconds until her performance.

Finally "Nutcracker week" arrived.  Boo danced her way through the week, practicing her part in the kitchen, prancing down the hall into school every morning, and asked to listen to "her"  Nutcracker music over and over (and over and over) again.  Soon the night of dress rehearsal arrived and she was literally dancing for joy before, during, and after it was over.  Not even a late night of rehearsal made her tired, and getting her to go to sleep afterward was a challenge.  I truly believe she ate, slept and dreamt Nutcracker that whole week.

Finally, performance day arrived.  Boo woke up slightly grumpy - I assumed at the time it was due to being up a touch later than normal the night before at a family birthday party.  Looking back I wonder if it was a sign of things to come that day.

Even though Boo's call time wasn't until 6:30,  I had to get her ready in the morning  (Bill is bun-challenged) before taking her sister,  who was a mouse in The Nutcracker,  to her Saturday afternoon performance.  Because Boo's part was double cast, she was only in half of the shows, and her cast was to perform Saturday night and Sunday afternoon.  When I left to take Kiki to her call time, Boo was a little disappointed she had to wait until much later to go, but she was otherwise perfectly happy and bouncing off the walls, bubbling with excitement.  Little did we know, that was all about to change.

Saturday night finally arrived.  After dropping Kiki off for her curtain call time, I waited in the lobby for my husband to bring Boo, who had a much later call time.  She arrived on schedule, full of excitement and so happy to finally have her chance to perform.

Fast forward to show time. . .  As The Nutcracker opening music started, my heart started pounding with excitement (and a touch of nerves) anticipating watching the girls' performances.  I was especially excited to see Boo, whose Nutcracker moment finally arrived.  Bill and I sat in the audience with my Dad, who had flown in from North Carolina, and with the majority of Bill's family, who had trekked in from Ohio.  All of them made the special trip to see the girls perform.  More guests, including my Mom, were due to see the Sunday afternoon performance the next day.

Just as The Nutcracker party scene was ending, my phone (ringer off) started buzzing in my pocket.  I ignored it, figuring whomever was calling could wait.  A few seconds later, the phone buzzed again, so I pulled it out thinking "Come on! Who doesn't know I am watching my girls dance tonight!"  I didn't recognize the number of the "unknown caller, " rejected the call and put the phone back in my pocket, only to have it start buzzing again!  I started to worry - what if one of the girls was hurt or sick? Maybe someone backstage was calling?

Sure enough, just as that thought crept through my brain, I got a text message from someone working backstage saying Boo had just thrown up twice. My thought was "Seriously!?" Then they asked us to come and get her.  My heart sank.  I showed my husband and he shook his head in disbelief.  I was so torn:  my older daughter, Kiki, was just moments from taking the stage, and I didn't want to miss it, yet I knew either Bill or I had to go take care of Boo.  Before either of us could get up, someone came to get us.  Bill decided he would just go and leave me to watch Kiki dance.  I stayed and watched the rest of the show, but it was really hard to enjoy it when all I could do is think of Boo missing her performance.  I cried when her Gingersnap cast took the stage and I saw a different dancer in her place.  I was thankful we had tickets for Sunday, hopeful that she would bounce back quickly and be able to make her 2nd performance. Knowing that no matter what happened with Boo,  Bill would at least have another chance to see Kiki perform so I prayed hard that she wouldn't get sick too.

Fast forward to Sunday. . .Boo was still horribly sick with a nasty stomach virus, and had to miss both of her performances in The Nutcracker.  We were all so heartbroken for Boo, knowing how hard she had practiced, and how badly she had wanted to be in the show.  She was too sick to think about it on Saturday,  but when she realized on Sunday morning she was going to miss both performances, she was distraught.  When she realized she would not get to perform, she wailed,  "I did all of that practice and now I don't even get to do the show!" Then she put her head in my lap and just sobbed.  To see her that way was so heartbreaking, and I cried right along with her. I tried my best not let her see my tears. While I did want her to know I felt sad for her, I was afraid if she saw me cry, she would be even more upset.

Heartbreak and all, Boo did not let that whole experience get her down for long.  After the final performance on Sunday, her sister Kiki brought home a special surprise for her - a Get Well Card signed by the entire Nutcracker cast. Kiki told us how one of the dancers, a 5th grader, had the idea to make the card and have everyone sign it.  That same sweet girl wrote this note to Boo, "You will still shine like a star even if you aren't here."  I teared up when I read it, and Boo just beamed.  Despite knowing she missed her performances,  the act of kindness shown by this girl and the rest of the cast made her feel so special. She hugged that card as if it were her most prized possession (at the time, I really think it was). 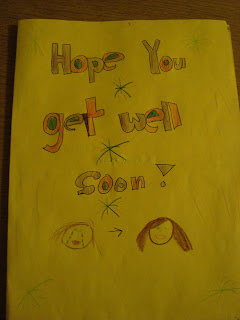 Soon after The Nutcracker was over, winter break and Christmas came,  providing a great distraction from Boo's sadness.  She still did have a few moments when she thought of something else she missed out on, and would say things like "I didn't get my picture taken with Mother Ginger!"  and "I didn't get to sign autographs on stage!"  But her sadness gradually morphed into determination:  Boo says she is definitely going to try out for The Nutcracker again next year and even wants to audition for the spring ballet production of Cinderella. She is not going to let anyone, or anything - not even a stomach virus - keep her for having her chance to shine.  What Boo may not yet realize is that she already shines and has for eight years now.  She IS a star in our eyes, whether she is on stage or right here with us. We are so proud of her and love her very much.  Happy 8th Birthday, Boo! 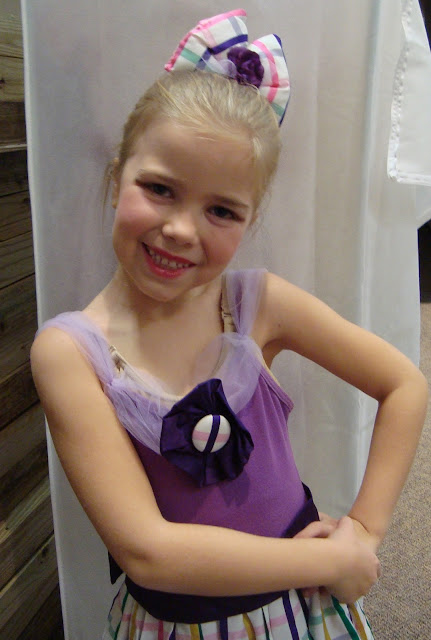 *I started this blog post on January 4, determined to follow in my annual tradition of writing each girl a birthday post.  However, I realized that I won't do those posts any justice if I rush to try to get them written in time for their birthdays. That was the case with this one. I had too much of  a story to tell and the perfectionist in me just couldn't get it written and edited in time to put it up on her birthday.  My tradition will change a bit from here on out - I will try to post something about each girl sometime around her birthday, in addition to my sporadic posts throughout the year.
Posted by Kristi at 8:14 PM

You know... it's a story she'll be telling for years to come and one that she will look back on when she becomes a parent and when she faces challenges and disappointments as an adult.

And I adore the 5th grader who started that card!

Awww, that is so sad that she didn't get to perform! But I love seeing her determination to not let it stop her in the future!

That 5th grade girl deserves a medal! What a sweet thing to do!

Happy (belated) birthday to her! It sucks she didn't get to be in the show, but at least she knows she CAN do it.

Aww...I cried just reading about her missing her big day!