Last Friday, we took off on the "Holiday Road" (think of the movie "Vacation") to explore southern Indiana for a trip to Holiday World, an amusement park in Santa Claus, Indiana. With school out for the summer, we thought this would be a great way to reward the girls for all of their hard work this past year. While this was not our first time taking the girls to an amusement park - we've been to Kings Island, Dollywood, and the ever popular Disney World - we had yet to take them to Indiana's beloved Holiday World.

So many people I know who have been to Holiday World talk about how great it is, and they aren't exaggerating. It is easily one of the nicest parks (and yes I am including Disney) that we've ever been to! Holiday World boasts they are "#1 for family fun" and they have reason to brag. The park was sparkling clean (probably cleaner than my house), the staff was friendly, and the lines were fairly short. Plus, we enjoyed free parking, free sunscreen, free UNLIMITED soft drinks all day, and didn't die of heat stroke because there are actually TREES IN THE PARK. Yes, you heard me right, they have TREES. How often do you see real trees at amusement parks? That was so refreshing, because so many other amusement parks make you bake in the sun just to stand in line for their rides. 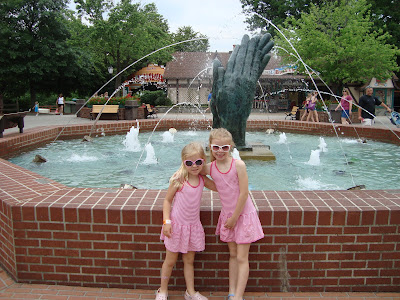 The girls had an absolute blast. They loved all (well most) of the rides, and because of the short lines, we could go on their favorites more than once each day. They also enjoyed going over to Splashin' Safari, which is the water park within Holiday World. And of course they were fascinated to see where Santa spends his summers. Who knew he was in Indiana this whole time? 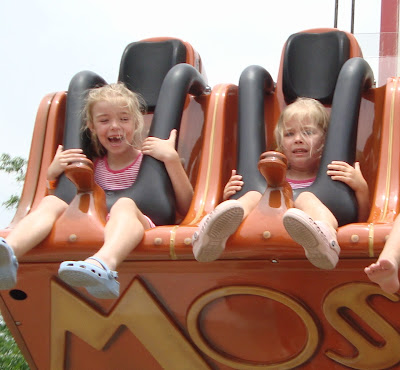 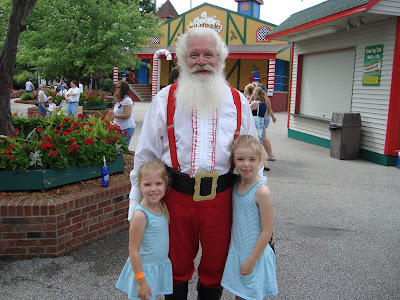 Holiday World has three of the best rated wooden roller coasters, including the #1 rated Voyage. Kiki couldn't wait to ride them all, until we got into the park and she saw the size of the hill on Voyage. Within the first hour we arrived at the park the first day, she rode The Raven, the smallest of the three coasters. She loved it but said she didn't think she would want to ride the other two coasters, The Legend and of course, Voyage. We kept trying to convince her, without wanting to push her into it, that she would love those rides too. The Legend was shut down the first day we were there, so she didn't have to think about that one, but we walked her by Voyage several times and showed her how fast the coaster would make it down the hill. Count to three and it is over, and then just enjoy how much fun the roller coaster will be. Bill and I each took a turn by ourselves, as Boo wasn't tall enough yet. Finally, towards the end of the second day, she decided she wanted to go on the Legend. She loved that, and so we tried once more to convince her she would like Voyage.

Kiki kept saying "I want to go on Voyage, but that hill just scares me." Having conquered that hill myself, I didn't really blame her. As much fun as it was going down, the anticipation of going up the hill was more than a little intimidating. I told her she didn't have to go on it, that I understood why she was nervous. She thought about it some more, and still wasn't sure. However, while we were getting drinks, she saw a girl about her age, wearing a shirt with the words "I Conquered Voyage, " printed on the front, and all of the features of the coaster printed on the back. Kiki saw that shirt and the age of the girl, and decided she was going give it a try! Before she could change her mind, Bill grabbed her hand and they got in line.

Meanwhile, Boo and I waited and watched for them to go. Before he got on the ride, Bill sent me a text (gotta love technology) and told us they were next. So we watched and waited for them to go up the giant hill. . . 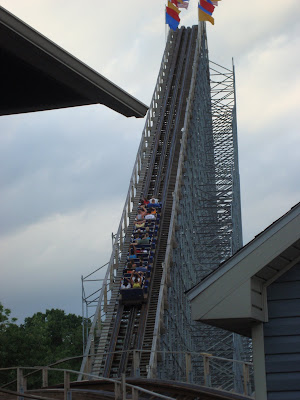 and a few minutes later Kiki came off the ride beaming! 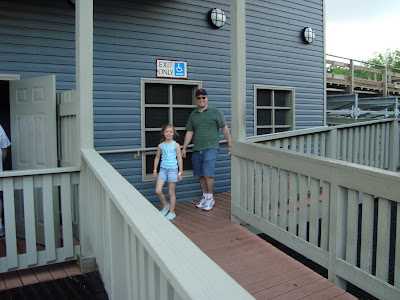 While she was on the ride, Boo and I decided her bravery needed to be rewarded with a special prize. . . 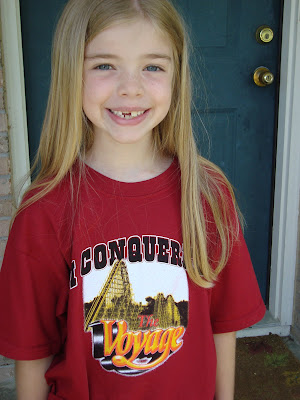 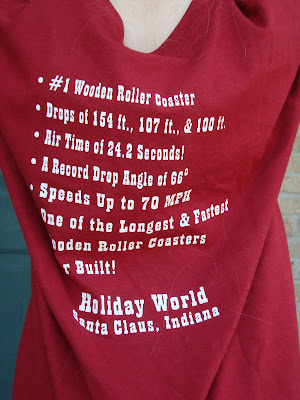 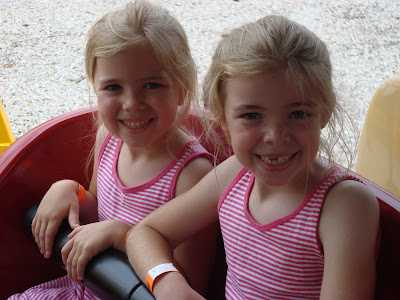 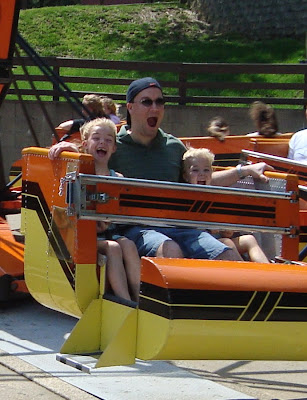 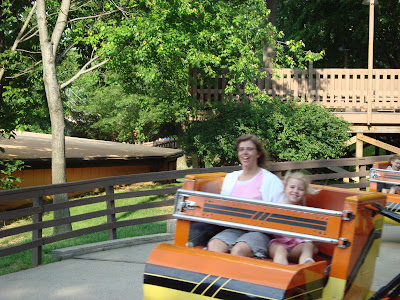 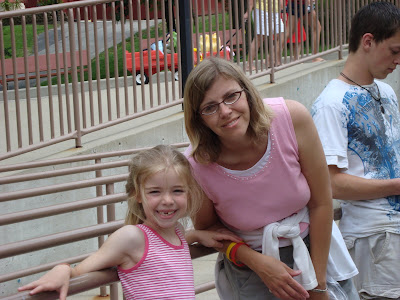 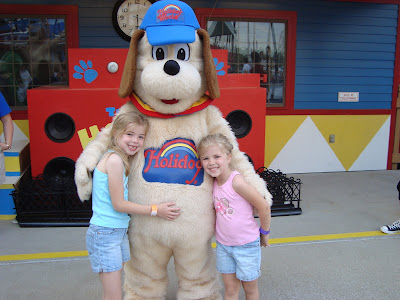 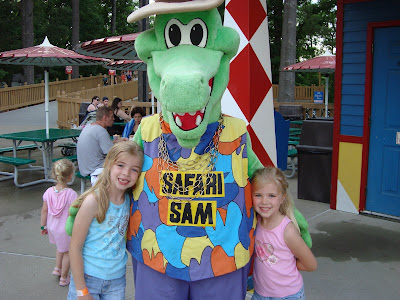 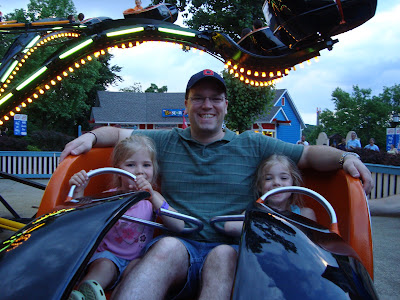 Looks like you guys had a blast! Our extended family caravans down there every year and we love it, too.
Thanks for playing along with Show&Tell this week!

What fun!!! We plan to do Holiday World once the kids are both a little older. I always hear such great things about it!

That looks like so much fin! I love amusement parks. I love the photo of her with her new shirt - she looks so proud of herself!

that looks like so much fun! Do you think a 5 and 2 year old would enjoy it? Or wait a few years?

thanks for the info as we were considering going in July, but wondered if it would be as stressful as most amusement parks which does not equate to "vacation" for moi! We might try it! Nash does not do well in heat though, so the trees info is a good one.

Going tomorrow and Friday with son and 4 & 2 year old. Can hardly wait. It's the first visit for all.

Looks like you had a great time! I'd never even heard of Holiday Land before.

Your daughters are very cute!

To answer the question about young children enjoying the park, I can almost PROMISE you that children of ALL ages will love it! In fact (despite popular belief) a child of 36" can ride almost half of the rides in the park with an adult! Children under 36" still have plenty of options of rides with at LEAST one ride in each "area" being accessible with an adult and many even allow them to ride alone! (A treat for most kids I have found.) On top of that, small children have two areas that are focuses almost completely on them, Rudolph's Reindeer Ranch and Holidogs FunTown. As a frequent visitor for years to the park (ever since I was small), it has been great to see how the park has continued to grow and keep up with competition without the loss of customer service or family focus!