Take Me Out To The Ball Game 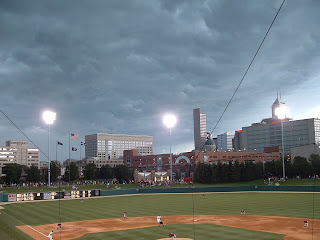 Last week, Grampa Jack was in town visiting, and we thought it would be fun to take him to an Indy Indians baseball game. Little did we know that Mother Nature wanted to interfere and turn this favorite American pastime into a weather show. The day started out with sunny skies and sweltering heat warm temperatures. We took Boo to dance class, had lunch, and played outside in the scorching sun backyard. Our original plan was to meet Uncle Mark and the cousins at his house and then caravan to the game. Daddy would be coming from work and meet us downtown.

Glitch #1: Uncle Mark was flying back from a trip overseas and had several flight delays, so now it was time for Grampa, the girls and I to play taxi. With some help from Grampa's new GPS , we first picked up Sam, who was at a friends house on one side of town. Then we met Noah at his Dad’s house in another part of town, and then drove downtown to get the baseball tickets. Finally, we trekked back up to yet a different part of town to pick up Clare who was at a friend’s birthday party. PHEW! We were hungry so we decided to go to a nice fancy, nutritious restaurant Burger King. After we ate, it was time to fill our gas tank and head back downtown for the game. 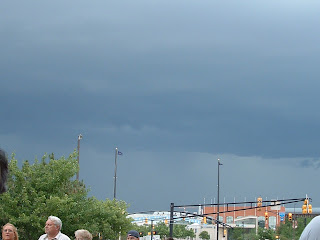 Glitch #2: During this time of filling our tanks and tummies, the once sunny skies slowly turned an ominous dark purple and green. Bill called with updates on tornado and severe thunderstorm warnings that were chasing him all the way to the game. The sky grew darker and darker as we drove. By the time we arrived downtown, sirens were going off! Yaaay! Just in time for us to sit in the UPPER deck of the stadium!

Glitch#3: We parked underground (at least our car would be safe) and went into the stadium where Bill and Uncle Mark were waiting. Just as we sat down, it started raining, but it was just sprinkling, so we stayed put. Not for long! The rain turned from a trickle to a downpour. The stadium officials encouraged those on the lawn or upper deck to take cover, so we went downstairs for a bit. The storm moved through quickly and we returned to our seats. Not to say it was over though. Throughout the entire game, we were treated to a lightning show. Some of the most spectacular lightning I’ve ever seen, streaked across the skyline. I usually hate storms, but for some reason I wasn’t nervous about the lightning. Maybe because it was mostly cloud to cloud lightning, or that the storm mostly seemed to miss us. Certainly didn’t faze the baseball players, as they played on, business as usual. 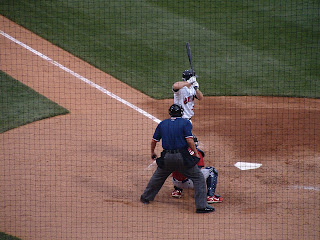 Glitch#4: The rain really started coming down just as the game was ending. We moved up to the empty seats just under the awning, or short roof above. That kept us fairly dry until it was time to leave the game. We exited the stadium to be greeted by a nice steady rain shower. Grampa and I had a great time carrying the two girls through the driving rain to our nice dry underground parking spot, which was of course about a 1/2 mile away. We really didn't get too wet though. Who would have thought two little girls would make such great umbrellas!? I really enjoyed taking my girls to a game and teaching them about the sport. It is one of the simplest to follow and understand, yet so difficult to explain to a child. Boo had lots of questions:

Me: “A glove that a baseball player wears to protect his hand when catching a ball.”

B: “Why does he need to protect his hand?”

Me: “Because the ball is moving very fast and it actually hurts when you catch it”

B: “Why isn’t Daddy catching it yet?”

Me: (chuckling) “well. . .because none of the balls have come this way"

B: “Oh.” (Thinks a minute, then points to third baseman) “why is that guy standing there and not doing anything?” 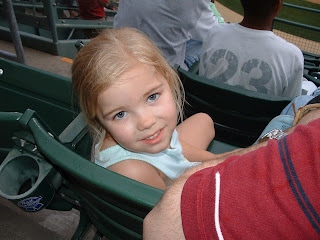 . . . and so it went on. Lots of questions, lots of answers, and lots of laughs! No peanuts or crackerjacks but we enjoyed some lemon ice, popcorn, a spectacular lightning show, fireworks and of course a baseball game (which our team won!). Mother Nature sure tried hard to ruin our evening but we made the best of it! 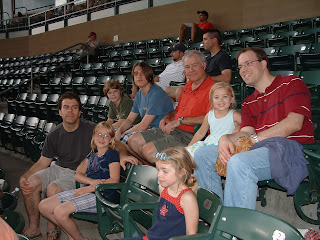 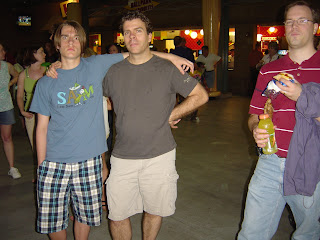 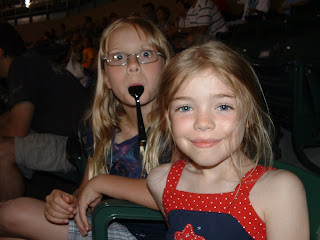 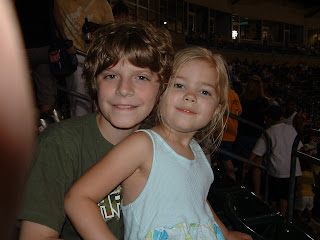 What fun! (and what sights!!)
LOVE Indians games. :-) Those are the times that memories are made of.