When Kiki was about two years old, the daddy private parts somehow earned the nickname "ding ding." Seems to me this all started with my husband, who gave "the parts" that name when Kiki was playing with him and accidentally kicked him down there yonder. He told her, "no kicking Daddy in the ding ding, " which was followed by many giggles from our precocious two year old.

Weeks later we were shopping for a birthday present for him and walking through the men's department looking at clothes. She said "Get Daddy a ding ding!?" I was mortified until I realized she was pointing to the belts (and then I laughed my ass off)! I was more than amused that she had thought all of this time that the "ding ding" was the belt instead of the male body parts slightly below that area. Why would she know anything else?

Fast forward six years and somehow the discussion comes up about the "ding ding" again. One night after dinner, Bill was joking around about teaching our dog to "get the ding ding" if there was ever a bad guy around. Mind you this is a Labrador, who won't even bark when strangers come around, and would likely lick an intruder to death. Then realizing that he didn't want to give the girls any ideas, Bill told them "you know you should never kick or hit a boy on his ding ding." Of course the girls giggled. We told them that this was never OK and if they did this, they could really hurt someone. He said the ONLY time it would be OK., was if a boy was hurting them and wouldn't stop.

I kept looking at both girls to see if they were understanding this, and then thought to ask "you do know that when Daddy says "ding ding" he is talking about a boy's private parts, right?" Both girls just smiled at me and then Kiki said, "I know why they call it a ding ding." I said "Oh really? Why?" and she said, "because it just hangs down and goes ding, ding, ding, ding," all while waving her belt back and forth between her legs.

And that was the end of THAT discussion. . . 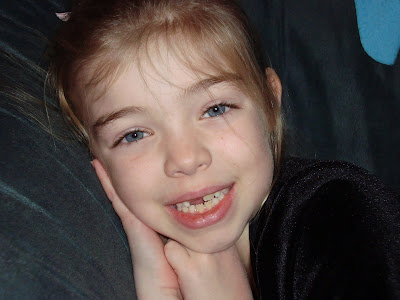 That is HILARIOUS!!! You can sooo use that against her later!!

I'm giving you a blog award- swing by later to check it out!